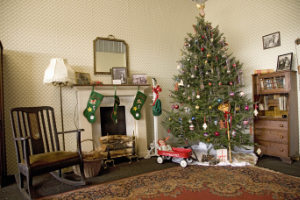 The Christmas tree is an iconic symbol around the world for many reasons. It’s a symbol of timeless traditions, family gatherings and most importantly, a beautifully decorated tree that lights up the holiday season. Many people don’t even think twice about setting up the tree and decorating it with brightly colored ornaments around this time of the year. But have you ever wondered what the Christmas tree represents? Where it all started? Or, maybe where most of the Christmas trees are grown?

In southwestern Pennsylvania, Indiana County is famously known as the “Christmas Tree Capital of the World.” Beginning in 1918, Christmas trees were grown as a popular farm crop, and by 1956, an estimated 700,000 trees in Indiana County were cut. Although other states may now grow more evergreen trees, Indiana County claims to be the first and still proudly holds the grand title.

So, what’s so special about a Christmas tree? With the holiday season in full bloom, millions of trees will be sold to help spruce up the holiday décor in homes around the world. But have you ever stopped to wonder where it all began?

History of the Christmas Tree

With the hustle and bustle of the holiday season, it’s easy to set up a Christmas tree with all your favorite holiday décor without blinking an eye. It’s all part of the tradition – hanging the stockings over the fireplace, setting up the lights outside for a spectacular display in the neighborhood, and picking out the perfect tree to decorate and use as the centerpiece to celebrate the biggest holiday of the year.

The first-ever account of Christmas trees dates back to ancient Egypt and Rome, long before Christianity even began. People thought that plants and trees that remain green all year had a special meaning for people in the winter. Similar to how we decorate our trees this time of year, back then people hung evergreen boughs over their doors and windows. It was also believed back then that evergreen trees would keep away witches, ghost, evil spirits and illness.

The Christmas tree legend is said to have started in Germany, as a man named Martin Luther began the tradition of bringing a fir tree into his home. The legend has it that one evening Martin was walking home through the woods and noticed how beautifully the stars shone through the trees, and wanted to share this with his wife. So, he cut down a fir tree and took it home, where he placed small candles on the branches and said that it would be a symbol of the Christmas sky.

Another legend recalls that in the early 16th century, people in Germany combined two customs that had been practiced in different countries: The Paradise tree, which is a fir tree decorated with apples, represented the Tree of Knowledge in the Garden of Eden; And the Christmas Light, which was a small, pyramid-like frame decorated with glass balls, tinsel and a candle on top, representing the birth of Christ. With these two traditions combined, the Germans created the tree that many of us recognize today.

Whichever legend you believe, the Christmas tree tradition has remained a centerpiece staple to the one of the biggest holidays of the year. On top of having a unique origin, there are many fascinating qualities to the evergreen trees and it takes a little bit of knowledge to know how to pick out the right one.

Many families make it a holiday tradition to scout out the perfect tree. And when you’ve claimed the title of the “Christmas tree capital of the world,” you should know your way around picking out a good evergreen tree.

And there are many benefits to picking out a real tree versus heading to a store to pick out an artificial one. With “real” trees, you are helping the environment. Not only do they produce clean air and oxygen for you to breathe, but they also provide natural habitats for birds and animals. Real trees also help keep our water clean and the soil stable. Once recycled, real trees can create great garden mulch, as well as bird feeders.

So, maybe this year will be your first year picking out a real tree. Or, maybe you haven’t been part of the process of picking out the tree that goes in your home. Whatever the case may be, here are a few helpful pointers on picking out the right tree:

After picking out the perfect tree and getting it to it’s rightful destination, there’s a few tips and tricks to keep the tree taken care of until recycling it after Christmas is over. Storing the tree in a cool place until it’s ready to decorate, is important, as well as making sure the stand is the correct size and holds at least one gallon of water. Be sure to give your tree plenty of water as it can consume as much as a quart of water per day, especially in the first week.

Growing and selling Christmas trees have become a top-selling business as an estimated 34 to 36 million trees are sold each year to eager buyers. And while 77 million Christmas trees are planted each year, they typically take around six to eight years to mature. So while it’s a slow process, it’s well worth the wait to create the perfect tree to encapsulate the beautiful holiday season and light up your home.

How much is Social Media Influencing Our Youth?
O’ Christmas Tree
Caring for a loved one? You’re not alone
What Can You Do To Prevent Bullying?
National Suicide Prevention Month