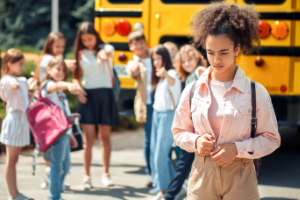 As growing protests throughout major cities and talks about racism and police brutality have emerged recently, you might have noticed that your children are curious about the news and want to learn more about it. While many children are still sheltering at home due to Coronavirus restrictions, parents might have eased up on screen time a little, resulting in children seeing videos or news of protestors taking a stand after George Floyd, an unarmed black man in Minneapolis, was arrested and later died under police custody.

With both negative and positive messages flooding news channels and social media outlets 24 hours a day, it’s hard to not be concerned whether or not your child understands what’s going on or fully comprehends the situation. Taking the time to talk with them and listen to them could help them understand better, while also creating a strong bond and connection between yourself and the child to engage in further communication down the road.

Especially in this day and time, children and young teens are exposed now more than ever through online videos, television shows or other screen-time related platforms that slip in underlying political opinions and moral dilemmas, and it can be nerve wrenching for parents to decide when it’s time to have a talk about hate or racism or other negative impacts in our society. So, at what age is the appropriate time to have a conversation about it?

Communication by the age

As with most learning comprehension skills, the older your child gets, the more they are capable of understanding and making genuine opinions on whatever subject is at hand. So, in this case, talking to your children about news-related topics that can become graphic or intense for them to hear or watch should be based on their age and thought process comprehension. Parents are worried about their children being exposed to negative or violent news early on, but with a good explanation accompanying the situation, you can really help your child learn and make the most out of the situation.

Let’s see how some professionals break it down by age:

Although these conversations may not be comfortable to have, it’s necessary as children grow older and become more exposed to the world and others around them. Especially in this day and age with the 24-hour, instant news updates and social media influences, it can be tough for children – and yourself – to navigate these unchartered waters.

In some cases, having these conservations early on can open the doors of communication between you and your child to let you know if they are experiencing hate or bullying of any kind at school or during outside school activities.

What to do when you see bullying

Children can be bullied not only in person, but also on the internet and it’s important to know as a parent what to do in order to help them out during tough situations.

Watch for these signs that your child might be dealing with a bully:

As a parent, try to avoid assumptions as listening to your child without judgment can increase the likelihood of them opening up and communication with you. And if your child isn’t talking, but you suspect that something is wrong, share your observations and watch for clues. The best time to try and have a conversation with your child is when they are calm and have had some time to decompress after the school day.

Another thing to try to avoid, according to professionals, is confronting the other child’s parents. In most cases, the situation ends up being more awkward and uncomfortable for both kids and leaves the problem unsolved. This can also lead to breaking the trust between you and your child.

Instead, try asking the teacher for help as many schools have programs set up for handling cases like this and the teacher will also notice changes in your child’s behavior and emotional state. Teachers are often happy to know that a parent is involved and concerned about their child’s safety and is willing to help as soon as you suspect a problem.

Unfortunately, bullying can cause long-term emotional harm for children and can make it easy for them to go down the wrong path. Whether it’s physical, verbal or emotional, it’s all equally important and should be dealt with as it can lead to developing anxiety, depression and symptoms of PTSD later in life.

So, beginning at a young age, try to help your child see the difference between love and hate and then continue to grow those concepts as they reach an older age. You never know, your child could be the next person to take a stand against bullying at school or take a stand against something they strongly believe in, such as the wrongful ways that racism and police brutality still exist in our society. And as a parent, you can rest peacefully and know that you’ve done your due diligence and raised someone that is ready to take on the world.

When Pennsylvania Schools Open, How will COVID-19 Change the Landscape?
How to Talk to Your Kids About Hate
Beware of the Online Predators: What to look for & how to react
Recognizing People on the Autism Spectrum
National Safety Month: Constructive Ways to Prepare for the Worst